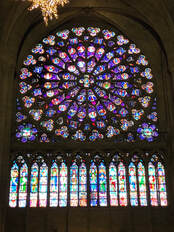 Imagine being asked to follow someone, abandoning everything you're doing, and leaving at that instant!  Then, once you follow him, engaged in a mission of goodness and love, the world turns on your leader, and he is put to death by the state in the most degrading and insulting of ways as a punishment for delivering the message you have worked to deliver.

Yet, despite the hostility, despite the persecution, despite the bitter denigrations of everything you worked to achieve; after his death, you pick up, by yourself, and deliver his message to the furthest corners of the known world.

What kind of person would do that?  Who would show such devotion?  Such perseverance?

They are our only window to Jesus the man, to the Word made flesh.  Everything we know of who Jesus was, what he said, how he acted, and what he taught came to us from them. . . .at their great peril!  Indeed, the strongest evidence of what happened on the third day following Passover is the lives these men led.

So, who were these twelve men that brought Christianity to the world? The ones who taught the Church Fathers?   Who walked with Jesus and then lived to tell us about it?

Technically, the first apostle was John the Baptist, the product of a miraculous pregnancy between the elders Zechariah and Elizabeth.

Elizabeth was Mary's "relative," making John the Baptist Jesus's "relative" once removed.  It appears that John was an Essene, a member of an ascetic Jewish sect that vowed poverty and immersion in water for cleansing.  The Essenes lived at the shores of the Dead Sea, having concluded that Jerusalem and cities like it had become too material; too corrupt to allow for the proper worship of God.  They are the same people that left us the Dead Sea scrolls.

John the Baptist fulfills the prophecy made by Isaiah that there would be one who, from the wilderness while wearing clothes of camel hair and living on locusts and wild honey, would announce the coming of the Messiah.  John the Baptist spent the greater portion of his life announcing the kingdom of heaven and building a large following of disciples about the Jordan River, north of the Dead Sea.  He baptized Jesus Christ, though he protested by saying it was he who should be baptized by Jesus, not the other way around.  Ultimately, he  complied after Jesus persisted. (Matthew 3:13-17).

John the Baptist did not live to see the Crucifixion nor the Resurrection since Herod, at his mistress Herodias's insistence, beheaded him. According to Josephus, the contemporaneous, non-Christian, Jewish historian, his execution took place at around 29 A.D. in the fortress at Machaerus to the east of the Dead Sea.

John's followers were an easy source from which Jesus could recruit his own disciples. Andrew Bar-Jonah (son of Jonah) was one such disciple who followed Jesus when John the Baptist singled him out as "the Lamb of God." Andrew then sought out his brother, Simon Bar-Jonah, announcing, "We have found the Messiah."  When Simon was brought to Jesus, he said, "You are Simon the son of John; you will be called Cephas," which translates to Peter.  Thus, Peter, the first Pope, entered the Church.

The next day, Jesus went to Galilee where he found Philip, who was from Bethsaida, the same town from which Andrew and Peter originated, and one of the places where John the Baptist often preached.  It is therefore likely that Philip knew Andrew, Peter, and even Jesus prior to being called.   John the Apostle tells of how Philip told his friend, Nathaniel, of Jesus and recruited him.  Nathaniel, initially hesitated because he questioned what good could come from Nazareth.

Nathaniel's conversion was sealed only after Jesus told him that he had seen him under the fig tree.  Nathaniel was so surprised at having Jesus know him despite not having previously met that he declared, "Rabbi, you are the Son of God; you are the King of Israel."  Jesus answered, "Do you believe because I saw you under the fig tree?  You will see greater things than this." (John. 1:49-51)

Jesus asked James the Greater and John the Apostle to join him when he came across them while they were fishing.  They were also siblings, the sons of Zebedee and Salome.  Salome is thought by many to be the daughter of Joseph by his first marriage, making her Jesus's half sister, and James and John his nephews. Older church tradition holds that Salome, known as Mary Salome, is one of three daughters of St. Anne who were named Mary. Under this interpretation, Salome would be Jesus's aunt, making James the Greater and John the Apostle Jesus's cousins.  Either way, it seems they were closely related.

It is possible that Matthew Levi and James the Less or the Younger were also siblings, as they were sons of Alphaeus, likely with another woman called Mary.  Matthew's addition to Jesus's closest followers is all the more offensive to the Pharisees because he was a tax collector, amongst the most despised class of citizens in Jerusalem.  The relationship adds an extra dimension to the confrontation between the Pharisees and Jesus regarding the appropriateness of paying taxes to the Romans.

Another set of siblings is Jude (also known as Thaddeus), Simon the Zealot, and James the Just.  These apparently were brothers of Salome and sons of Joseph, making them Jesus's half brothers.  They are mentioned in the Bible as brothers of the Lord.  Although James the Just was not one of the twelve, he became the first Bishop of Jerusalem where he was martyred.

Matthias appears in the Acts of the Apostle and is thought to be the oldest of the apostles.  He is thought to be one of the seventy disciples that were sent by Jesus to proselytize and was promoted to apostle in place of Judas the Traitor.  He was born in Bethlehem.

Thomas is the doubter, but as we shall see, it is likely he traveled further than any other apostle in spreading the word of Christ.  He is also called Didymus, which translates to "twin."  Eusebius, the fourth century historian, says Thomas also went by Judas.  There is much speculation but little substance as to how Thomas got his nickname or even if he had a twin.  Some even say he was called Didymus because he looked so much like Jesus.

So, it appears that, almost to a tee, the apostles were Jesus' family and some of his closest friends. But their efforts at promoting his word did not end with the stories passed down in the Bible.  As we shall see, each of these men lived out incredible lives full of personal sacrifices, triumphs, and pain.  James the Greater went to Spain while Mark proselytized in Egypt.  James the Less worked in Arabia, and Matthew went just to the north of the Arabian Sea. Simon the Zealot spent his days in Persia and Iran just to the south of where Nathaniel preached.  Jude went to Armenia and Andrew to the north of Jude, east of the Black Sea.   Phillip missioned in Constantinople, and John the Apostle ends up at Ephesus.

That these men would leave everything to spread the gospel after having witnessed Jesus's passion and crucifixion is perhaps the greatest testament to their love and devotion for our Lord and to the overwhelming effects what they witnessed had on them and upon their lives.

In the next installment we will begin examining what is known about the individual experiences of these incredible men, and we will do so by looking into the life of James the Greater.


Dr. Julio Gonzalez is an orthopaedic surgeon and lawyer living in Venice, Florida.  He served in the Florida House of Representatives.  He is the author of numerous books including The Federalist Pages, The Case for Free Market Healthcare, and Coronalessons.  He is available for appearances and book signings, and can be reached through www.thefederalistpages.com.